What is the difference?

Full vs broad spectrum CBD: While both have an array of potential benefits, broad spectrum and full spectrum CBD oil have a slightly different composition. As a result, you may have an experience with one product that you might not necessarily have with another. 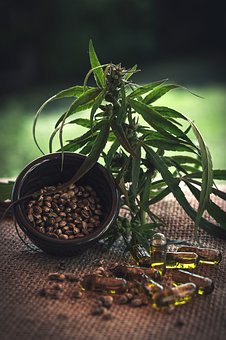 Why Are There So Many CBD Products?

Part of what has made CBD so appealing to the wellness and beauty sectors is its versatility. With the rise of the hemp industry, laboratories have worked overtime to formulate specialized CBD products.

The world has also caught wind of the benefits of CBD oil. This includes the 100-plus cannabinoids within hemp that work together to produce even more benefits, a partnership known as the entourage effect.

Thanks to the entourage effect, it became more advantageous to produce hemp-based products with as many cannabinoids as possible. The cannabinoids within the formula are what differentiate full spectrum CBD oil, broad spectrum oil and CBD isolates.

How to Extract CBD Oil

All types of CBD oil are extracted by applying pressure to the hemp plant. The highest quality CBD oil companies use either food-grade ethanol or pressurized carbon dioxide to apply this pressure.

As the plant comes into contact with food-grade ethanol or pressurized carbon dioxide, the pressure will cause the hairs on the plant to burst open. These hairs are known as trichomes, and they hold precious cannabinoids. Cannabinoids, including CBD, are the compounds responsible for many of the benefits of CBD oil.

When the cannabinoids are released, the molecules bind onto the carbon in the pressurized carbon dioxide or food-grade ethanol. From there, these molecules are distilled to remove any solid plant material from the formula.

Lastly, the CBD oil is refined. The solvents are removed from the final product, leaving precious cannabinoids, terpenes and other phytochemicals behind. At this point, you are able to identify the compounds within the product. Specialists can alter the formula to meet the standards of the particular CBD company. Ultimately, cannabinoids are either added or removed from the oil before it is used to produce CBD products.

What’s the Difference Between Broad and Full Spectrum CBD Oil?

What makes the difference between broad vs full spectrum CBD oil so confusing is that there is no definitive definition for either. It’s an arbitrary battle of linguistics.

Those within the CBD industry coined the terms themselves, but not everyone got the memo. This has muddied the waters between what full spectrum and broad spectrum CBD oil each mean.

As their names imply, full spectrum and broad spectrum CBD oil contain a wide range of cannabinoids. However, they aren’t identical. To understand the difference, it’s best to understand them individually.

What Is Full Spectrum CBD Oil?

Full spectrum CBD oil has had no cannabinoids removed, including the psychoactive compounds. The reason for this goes back to the entourage effect. All of the cannabinoids work in unison for the betterment of the whole, THC included.

If you see full spectrum on the label, be sure to check out the company’s lab reports. Although the industry has not regulated the terms, a full spectrum CBD oil will most likely have THC in the formula.

What Is Broad Spectrum CBD Oil?

The refining process is critical for crafting broad spectrum oil. During this step of the process, you can remove unwanted cannabinoids from the formula.

With broad spectrum CBD oil, you are still getting the synergy of the other cannabinoids. The only one missing from the party is THC.

What Is CBD Isolate?

While we’re on the topic of the refining process, some CBD companies take an extra step to create 99+% pure CBD. This type of hemp-based product is known as CBD isolate.

Typically, those who choose CBD isolate are sensitive to other cannabinoids. CBD by itself does have benefits. However, the results may not be as promising as those who opt for a broad spectrum or full spectrum CBD oil.

When you are purchasing a CBD isolate, make sure it is 99+% pure. Otherwise, there will be traces of other cannabinoids in the formula. Although these numbers are most likely negligible, it does defeat the purpose of seeking out a pure CBD product.

At the end of the day, both types of CBD oil have their benefits. While THC may help boost the overall formula, removing it from the equation doesn’t hurt the product. A broad spectrum oil can be just as effective at supporting wellness.

If you do opt for full spectrum CBD oil, be sure to read the label to find out the plant source. Full spectrum CBD oil can be derived from hemp or marijuana. Under the 2018 Farm Bill, any hemp-based product must have 0.3% THC or less.

Broad spectrum CBD oil doesn’t come with this excess baggage. These CBD products are derived from hemp and have had THC removed from the final formula, meaning potential psychoactive side effects are unlikely.

Get in touch with us for the best quality CBD products

If you are looking for something specific, but don't see it here, please contact us and we will try to assist. We are sourcing new products daily, but due to our stringent safety and certification requirements it takes a while for us to onboard new products.